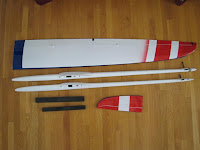 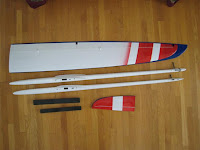 The wing panels on both models are almost identical in weight. 578g for the Tanga and 580g for the FS3. The FS3 does also have a ballast channel in the wing. The Tanga joiner is much larger and slightly thicker but only 10g heavier, 127g vs 117g. Tails are really close in size and weight. The Tanga is 34.8g and a FS3 with the control horn added is 33.2g. The Tanga fuse is a little lighter, but when you add in the ballast tube, the Tanga is 308g while the FS3 is 290g.
Posted by mlachow at 11:14 AM No comments: 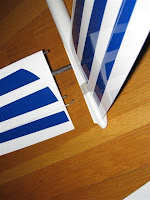 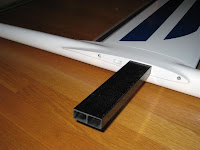 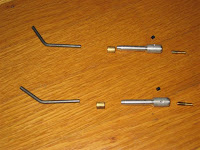 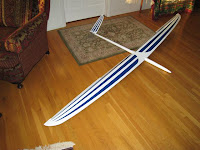 This one includes RDS hardware. Looks like the pin mounts in servo, aluminum piece attaches to that and the rod. Two different angles, one for ailerons and one for flaps.

V-tail is two-piece and the ball link is already installed.
Posted by mlachow at 5:20 PM No comments:

I missed the Cal Valley contest. Got most of the way there but had to return home.


If you want to see some results and pictures.
Posted by mlachow at 9:45 PM No comments: 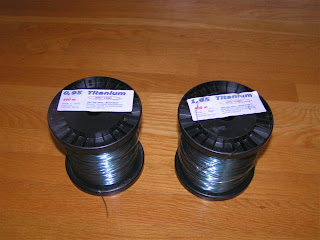 More new stuff to test out. Unfortunately it's snowing outside. The new line doesn't have as much stretch as Speedline but it is stronger. It should be good for light wind, strong thermal conditions where the thin Speedline can be risky on line breaks.
Posted by mlachow at 9:50 AM No comments:

For the foot switch on my winches, I use Linemaster Aquiline 971-SO switches. I've only had one microswitch fail from too much dust over the years. The best part is you can get the in colors. No black switch hiding in the grass. I have orange ones. Usual source is Newark Electronics. But I think some other winch part suppliers have them too.
Posted by mlachow at 7:00 AM No comments:

The team web site should get updated with stuff to buy in another day or two. Get ready to order a Hanes Beefy T with pockets, or a Long Sleeve Beefy T, or even an embroidered baseball cap. Production on the shirts is about 2 weeks off, so delivery on those orders will be at least one month out.

A few of our soaring friends have presented us with a challenge to get fund raising going. They will be matching your contributions up to $6000 if you make your contribution, purchase raffle tickets or purchase merchandise before March.
Posted by mlachow at 4:22 PM No comments:

The secret to getting good life out of your winch batteries is to keep them charged and use a good charger. For years I used the standard automotive chargers. They are heavy, inefficient, and the automatic features sometimes don't work. Plus they are bulky which is not good when hauling a bunch of equipment to a contest.

Now I use ACI Chargers. Since I have 6 batteries for 3 winches at home, I have two of the 1206CC's and two of the 1214CC's. The nice part is they do most of the charging at a constant current. They bring the batteries up to charge pretty fast compared to a normal 10Amp auto charger. I was surprised that they even helped revive some old batteries I had sitting around.

The charger uses a switching power supply so it's fairly small in size and weight. The Eastern Soaring League purchased some in 2008 to use for on flight line charging of the winches. And they also work well on the expensive batteries like the Optima's.
Posted by mlachow at 4:04 PM No comments:

What solenoid to use. I use a DC Power Contactor. I've been using Stancor 586-902's a long time and they work well and are reliable. Contact material is a silver alloy, not copper. The inrush current rating exceeds (600A) what you can put through an F3b winch and the continuous duty (200A) is in the range of what flows through a winch. They are a little larger than the auto solenoids most of you are familiar with and they are more expensive.

I usually purchase them from Newark Electronics.
Posted by mlachow at 3:52 PM No comments: