I have a Dataq DI-158U hooked up to a netbook for some winch testing. It has 4 analog channels so one is hooked up to the battery, another to the clamp on current meter.

First thing I did was recreate a winch tester with the device. The Dataq libraries are poorly documented but the UltimaSerial library is a lot easier to code.
Posted by mlachow at 11:17 PM No comments: 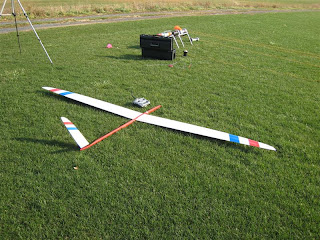 The question is what F3b models are in that box heading to Cal Valley....

I have the most time this year on a Shooter. Yellow/Blue/Red color scheme is good for visibility for me in clear blue skies. The thing launches lots of weight. I have two Tungsten bars that fit into the ballast tubes with some space left over for some more regular ballast chunks.

Second model is the new one, a Cyril. Yellow/Red cubist with standard black/white bottom/ Red fuselage. Also good for blue skies. I have some lead ballast for the wing slots so I can load the thing up a bit in the wind. This might be the stiffest model I have.

Third model is Freestyler. Lots off flying time on that one last year. But I don't like the white/red color scheme in blue skies.

The Ceres Lift is staying home.


Lots of JR servos all around. The Cyril has the 388HV's and 3717HV's in the fuselage with a LiFe battery pack.
Posted by mlachow at 7:03 PM No comments:

The Gator F3b web site is up and running. Great work Gordon.
Posted by mlachow at 7:00 PM No comments:

Traveling to US Team Selections

How do you travel to a F3b contest? Pack a few winches and airplanes and line in some boxes and visit Fedex. 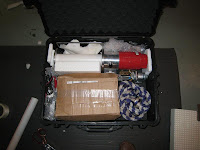 Winch box with stands for two winches, 3 turnarounds, chutes, and some tools. Stands and stakes are at the bottom of the 1610 case. There are also a few Soneil 12V battery chargers in there. 87 lbs. 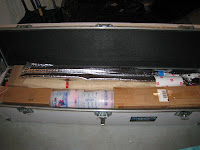 Airplane box with 3 models, 15 spools of line, tripod, some containers for soaking line and a field charger. 66 x 14 x 15 PackLite box.. 80 lbs. Most of the line is in boxes. Add some cardboard dividers for extra protection on the airplane parts. I add foam pieces to cover tow hooks and also to cover up the V-tail rods and the tail cone from damage or damaging other things. 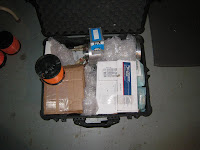 One more winch box for the second winch. Motor is boxed since it is easily removable on this winch and the winch is just a little too wide for the box. The swappable winch drums are also disassembled to save a little space. Some spare winch bits too like an extra foot pedal and solenoid just in case. One roll of practice line in there. Another 80 lbs. There is also a second motor in there for another winch and foot pedals.
Posted by mlachow at 4:07 PM No comments:

Well the Ceres F3b and Tanga were shipped off to new homes this week. Cyril should be here Monday. Saturday is time to practice with the Shooter.
Posted by mlachow at 4:27 PM No comments:

The event will be flown over three days with possibly a Friday practice and Saturday and Sunday contest. (Format for 3 days is open for discussion and suggestion of the F3B community.)

The event will be held at the IRKS flying field at Cocoa FL (The power flying will be suspended at this field while we have the contest.)

RC Groups Discussion
Posted by mlachow at 8:44 AM No comments:

Talking with Gordon Buckland at the Nats. We're kicking around the idea of a Jan/Feb timeframe F3b event in Florida. What do you think?
Posted by mlachow at 8:13 PM No comments:

Looks like another trip to nowhere for F3b soaring.
Posted by mlachow at 5:17 PM No comments:

For anyone interested in doing something between RES and Unlimited at the Nats, there will be F3b flying at the south end. 2.4 only for frequencies.

Biggest group should be there on the 28th.
Posted by mlachow at 9:31 PM No comments:

Paul Naton took a nice photo of my Ceres Lift at Cumberland.
Posted by mlachow at 10:44 PM No comments:

Time to start planning for some F3b flying. Record snows for the northeast haven't helped any for winter flying.
Posted by mlachow at 7:17 AM No comments: